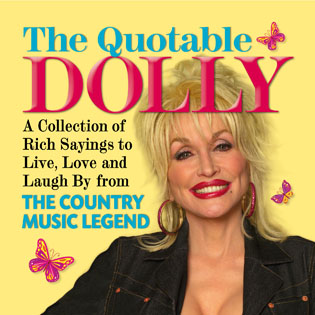 The Quotable Dolly: A Collection of Rich Sayings to Live, Love and Laugh By from the Country Music Legend

With the face of an angel and the zeal of a tent-show evangelist, Dolly Parton remains, at sixty-five, a mountain miracle. As ever, she appears a tangle of contradictions—a world-class poet in stiletto heels, a fragile flower and one-woman conglomerate, a serious songwriter and wisecracking comedienne. She is, most of all, a Southern original.
“My husband calls me ‘catfish’—he says I’m all mouth and no brains,” she told former CNN talk show host Larry King in 2003. But as this collection of quips and quotes bears out, Carl Dean, Dolly’s spouse of forty-five years, was just foolin’, and Dolly knows it. “There’s a heart beneath the boobs and a brain beneath the wig,” she says of herself, and insists when she’s inspired, she gets excited, because she can’t wait to see what kinds of ideas she’ll come up with next.
That spontaneity—and creative genius—results in the disarmingly funny and wise takes on life and love that punctuate her interviews, stage prattle, and casual conversations. Just as the butterfly, Dolly’s personal totem, acts as an agent of pollination, Dolly’s remarks on her self-image and her rules for living and loving may germinate fertile ideas in you. Or at the very least, summon a smile.
She doesn’t exercise, she told AARP the Magazine, but “my brain sweats. My mind goes all the time.” 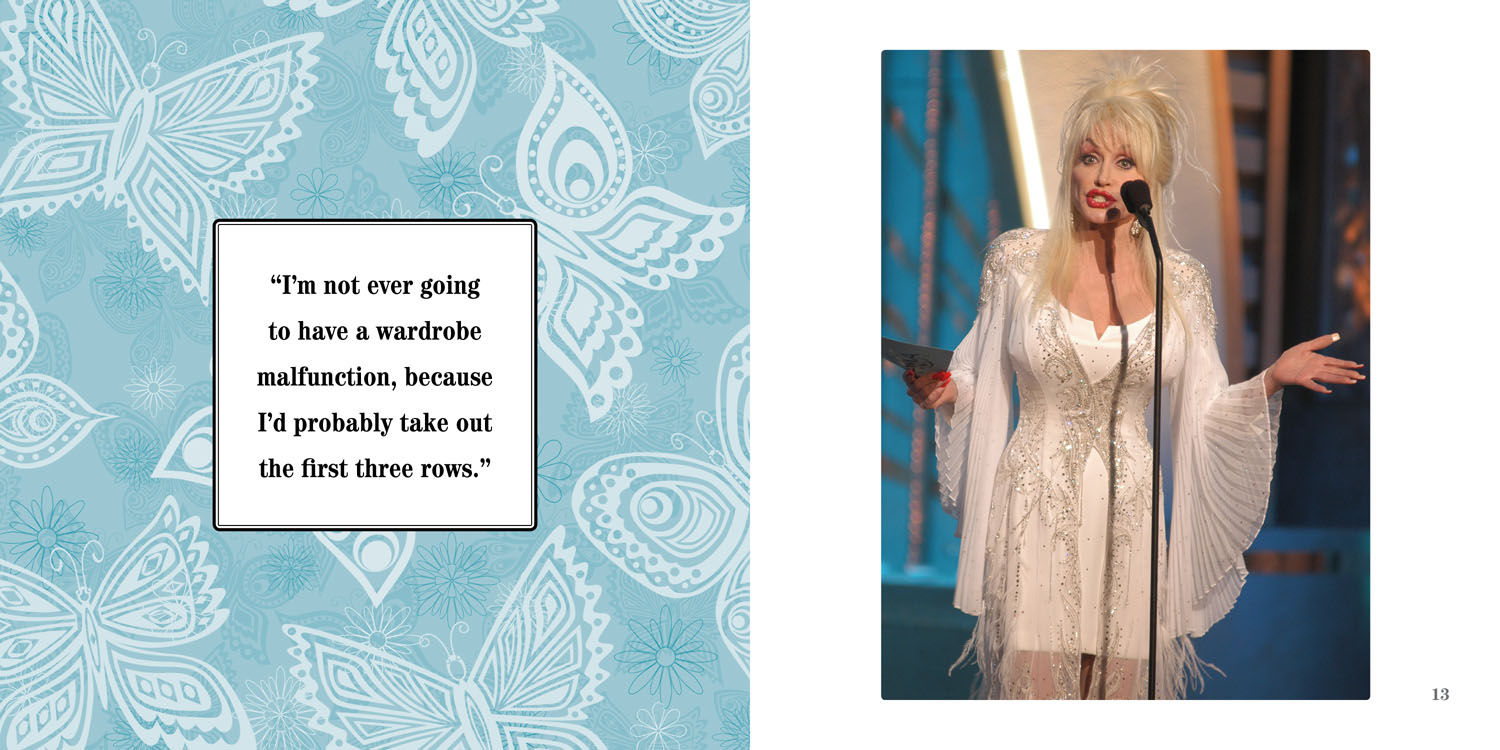 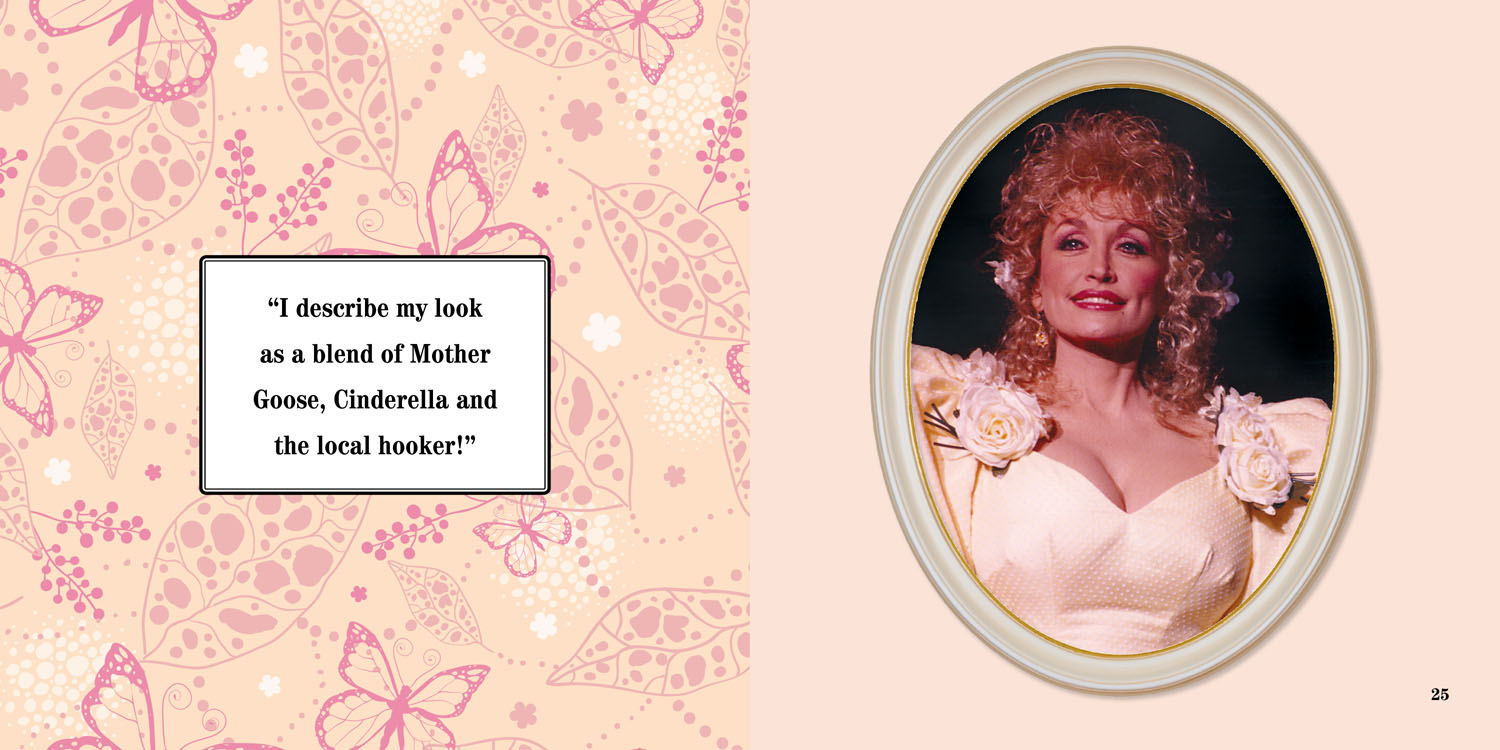 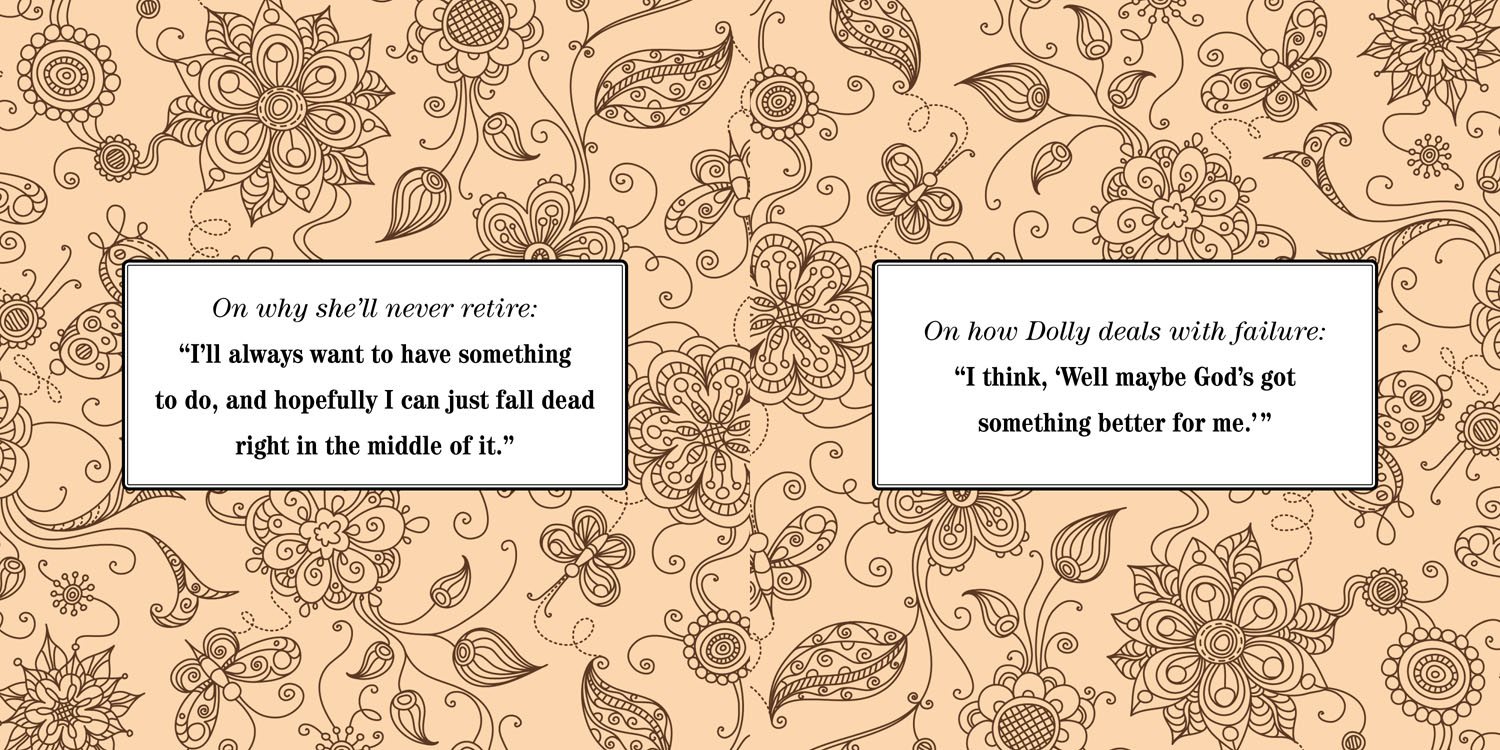 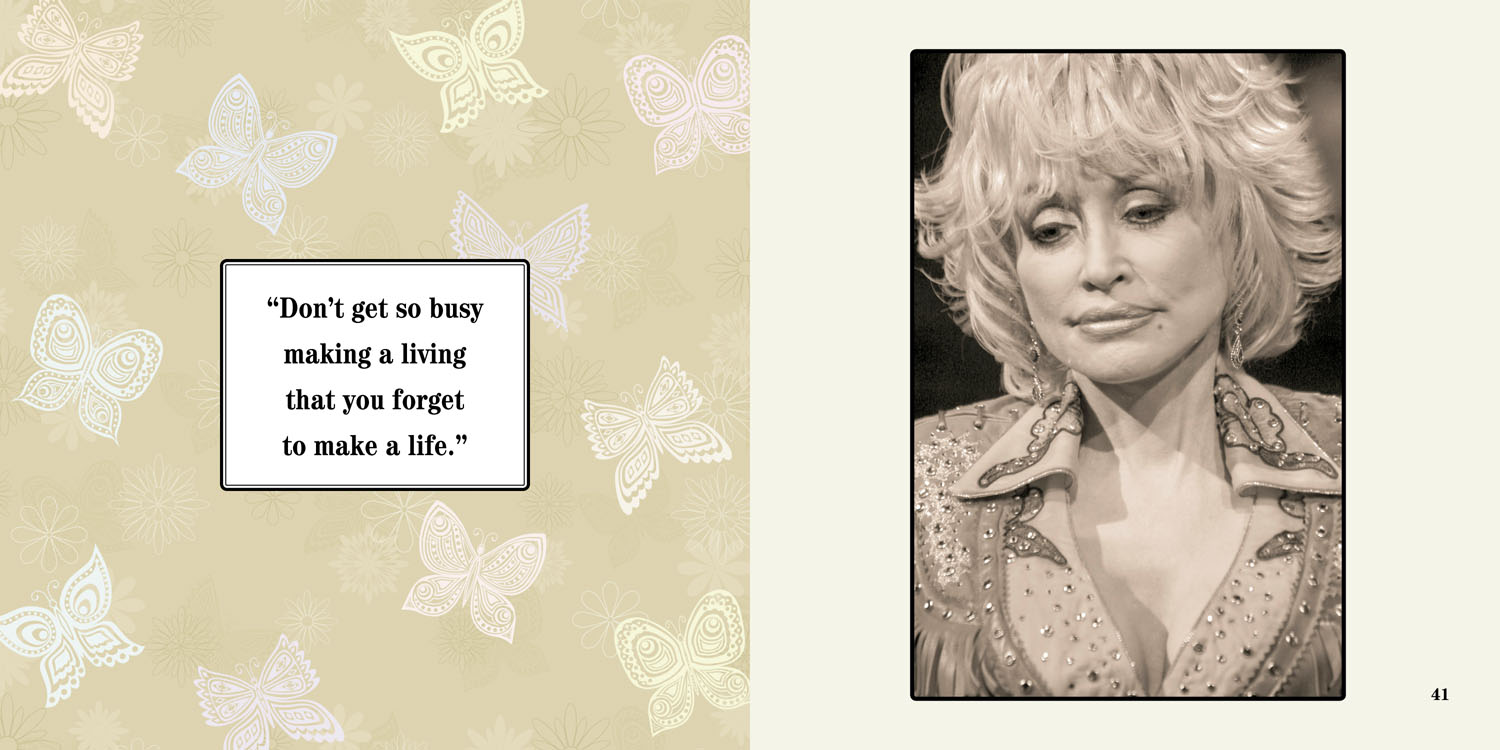 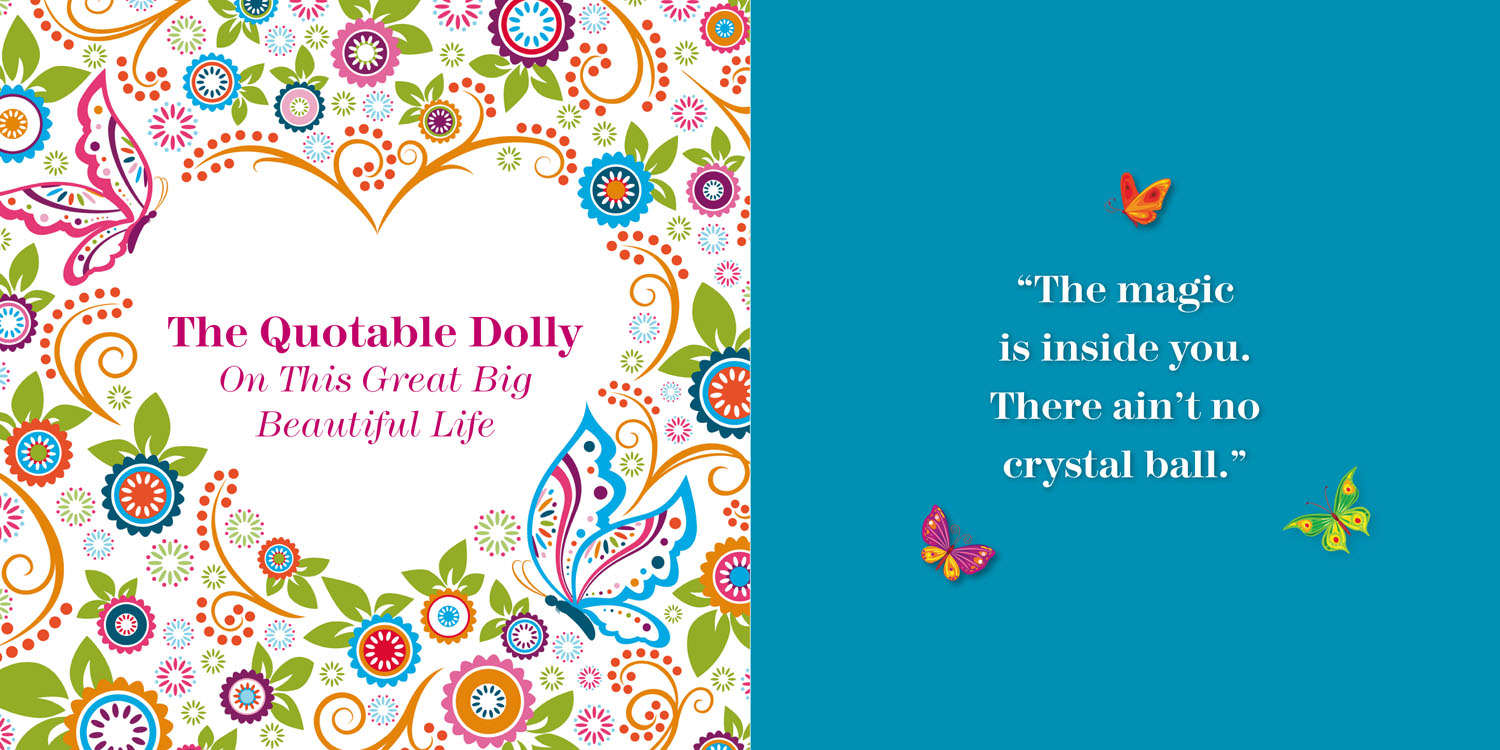 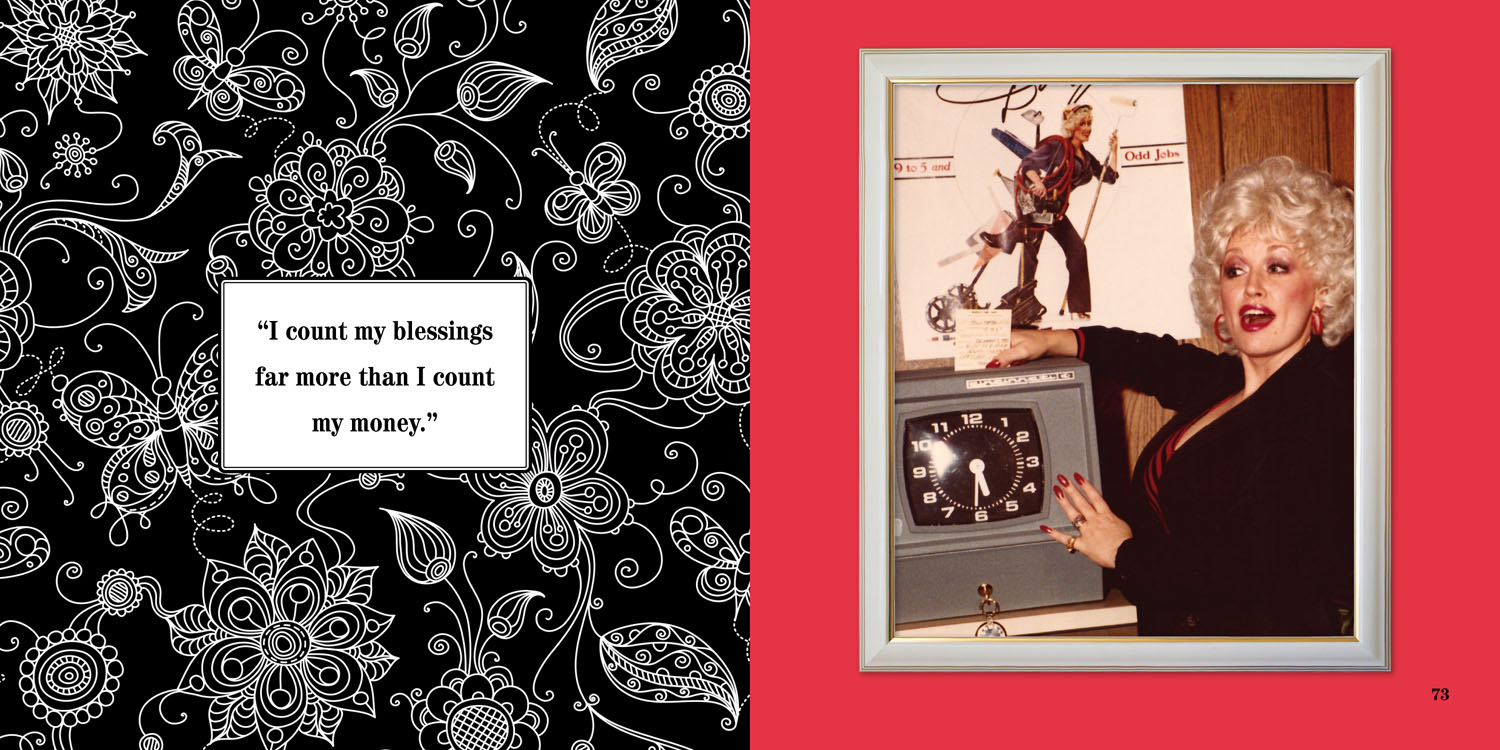 On her fascination with butterflies:
— “They remind me of myself…they just go about their business, gentle, but determined.”

On her looks:
— “People always ask me, ‘What do you want people to say about you one hundred years from now?’ I want them to say, ‘Dang, don’t she look good for her age?’”
— “I describe my look as a blend of Mother Goose, Cinderella and the local hooker!”

On her faith, dreams and determination:
— “I always love working with children. I never had children of my own. God has his purposes. God didn’t let me have children so everybody’s children could be mine. That’s kind of how I’m looking at it.”
— “I’m just one of those white trash, hillbilly women that’s made good.”

On this great big beautiful life:
— “I had to get rich so I could afford to sing like I was poor again.”
— “I always just thought if you see somebody without a smile, give ‘em yours!”