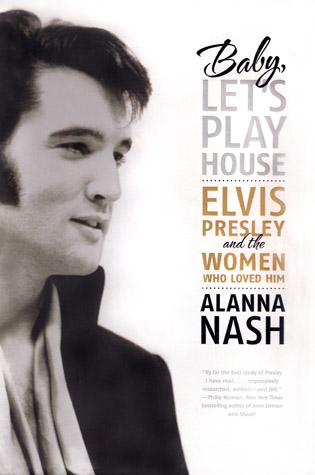 Baby, Let’s Play House: Elvis Presley and the Women Who Loved Him

AVAILABLE NOW! Limited number of first-edition hardcovers in pristine condition with perfect dust jacket—unmarred, unread, signed and authenticated by the author for only $50!

Purchase in the U.S.

Gladys.
In rock and roll mythology, she is the proud, all-suffering madonna, the commoner who birthed a king and died too soon, knocking his world off its axis. Like her famous son, her first name is all that’s needed. Elvis called her “my best gal,” but in the deepest psychological sense, she was not only his best gal, but his only one.
In the well-known images from the late 1950s, she appears a defeated figure, her eyes sad and ringed by bruised circles, her mouth perpetually turned down and set in a sorrowful scowl. At the height of her son’s notoriety, when she’s ensconced in Graceland, the home and farm Elvis bought for her, surrounded by the kind of luxury she had never really wanted and rarely enjoys, she spends her days as she always had–dipping snuff, drinking beer and hooch from a paper sack, staring out the window, and for a short time, until Elvis’s record company complained it wasn’t seemly, feeding her chickens out back. The hot-tempered woman who was known to dump a pot of steaming beans on her husband’s head when he crossed her is now a fearful soul, afraid for Elvis’s safety.

“Alanna Nash’s long look at Elvis’ bizarre history with women…collect[s] all the madness, badness and sadness of the Elvis myth in one exhaustive and embarrassingly tempting volume.”—New York Times

“The most comprehensive work ever on how the women in Presley’s life…influenced him and his music.”—New York Newsday

“An exhaustive and penetrating work that functions as an intimate personal profile, a family study and a psychosexual investigation of one of the 20th century’s true cultural icons.” —Commercial Appeal

“A frank and fascinating portrait of an essentially lonely man…[told] with grace and intelligence…The work of a master.”—Louisville Courier-Journal